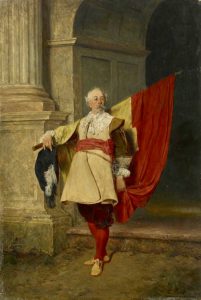 The artist, active mainly in Munich, was known for both genre and military subjects – the latter theme apparently stimulated by his involvement as a reserve officer in the Franco-Prussian War of 1870.

This small panel was reproduced in both the 1894 and 1905 NGV catalogues. Dean (1995) notes that a label on the back of the canvas, indicating that it was shown in Munich in Jan.1876, suggests that the work was probably painted c.1875-6.

See also Dean European paintings of the 19th and early 20th centuries (1995), p.108, commenting on the date. For the artist, see Bénézit 12, p.959 (listing the present work); and http://www.burlington.co.uk/artist-biography/carl-wilhelm-anton-seiler.html