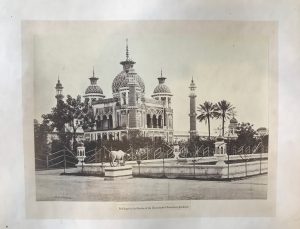 [reproduction: Buildings in the Garden of the Hooseinabad Emambara, Lucknow (H91.172/7)]

This set of prints is catalogued by the SLV as bought in 1875. Nothing comparable appears in the NGV’s annual report for that year, but the annual report for 1873 notes the purchase of “Sixteen Photographic Views from Delhi and Lucknow” (without naming the photographer/s), probably referring to the same group of prints.

Details for this set (titles indicated below each image; several are signed): 1. Remains of Hindoo Architecture near the Kootub… near Delhi; 2. A Room in Akhbar’s Palace, Fort, Agra; 3. The Cashmere Gate and Bastion, Delhi; 4. Ruins of the Palace and Lat of the Emperor Feroze Shah, near Delhi; 5. The Madrissa of Emam Zamin, near the Kootub; 6. The Great Emambara of Asj-o-dowlah, Lucknow; 7. Buildings in the Garden of the Hooseinabad Emambara, Lucknow (see reproduction); 8. Great Arch and Iron Pillar near the Kootub; 9. View in the Chandri Chouk, Delhi; 10. Chutter Munzil Palace, Lucknow; 11, View in the Kaiser Bagh, Lucknow; 12. The Karbala Mulka Jehar, Lucknow; 13. Ruins of the Residency and Banqueting Hall from the Cemetery, Lucknow;  14. The Kaiser Pusund, Lucnow; 15. The Chutter Munzil Palace, from the South; 16. Mausoleum of Sadut Ali Khada, Lucknow; 17. Sir Henry Havelock’s Grave in the Alum Bagh, near Lucknow; 18. Golden Temple, Head Quarters of the Sikh religion, Umritsur

See SLV catalogue; the photos are held with a detailed list produced by the library, but none are reproduced in the catalogue (as yet); author’s ID photo reproduced here