Simonetti, the son of a Roman sculptor, migrated to Australia in 1871, and spent the rest of his career largely in Sydney, producing monumental sculpture and busts of various local worthies. His marble bust of Goodenough (c.1875), shown at the RA in London in 1876, was donated to the Art Gallery of New South Wales in 1877: see comparative photo below. His bronze and marble monument to Captain Arthur Phillip was installed in Sydney’s Royal Botanic Gardens in 1897. 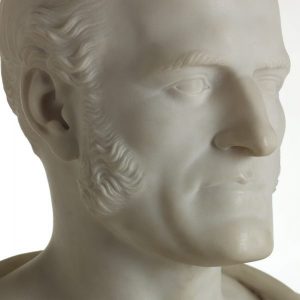