The apparent loss or deaccession of this small portrait, listed in the Melbourne gallery’s 1894 catalogue (but not in 1905), seems particularly unfortunate, on several counts.

While various portraits of the famous Shakespearean actor Edmund Kean (1789-1833) by others are extant (e.g. the 1814 canvas by John James Halls, showing Kean in the role of Richard III: reproduced below), there appears to be no record of the present work.

Singleton, a portrait-painter and miniaturist, also had ambitions to be a major history painter; his painting Imogen found by Arvigarus, Belarius and Guiderus in the forest (c.1790-95), depicting a scene from Shakespeare’s Cymbeline, was acquired for the NGV in 2002.

The donor (1823-71), who migrated to Melbourne in 1855, was a bookseller and publisher, whose list of publications included Peter Pindar’s Australian Celebrities, or Personal Portraits of 100 Theatrical Stars of Various Magnitudes (1865), and The Hamlet Controversy. Was Hamlet Mad? (1867). 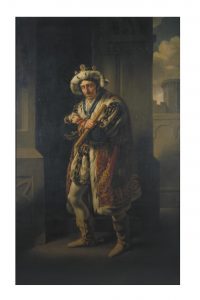 For Singleton, see Bénézit 12, p.1271 and http://en.wikipedia.org/wiki/Henry_Singleton_%28painter%29; and for the work acquired for the NGV in 2002, http://www.ngv.vic.gov.au/explore/collection/work/73664/. For Kean, see http://en.wikipedia.org/wiki/Edmund_Kean; and for the painting reproduced above, see https://collections.vam.ac.uk/item/O84968/edmund-kean-as-richard-in-painting-halls-john-james/. For other portraits of Kean, see http://www.npg.org.uk/collections/search/person.php?LinkID=mp02477&wPage=0 and http://images.library.illinois.edu/projects/actors/index.asp (refer index)