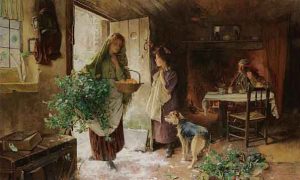 This large work was the most expensive of the 10 contemporary British watercolours bought in 1901. It typifies the artist’s sentimental approach to genre subjects, other examples bearing titles like Grandmother’s favourite and Thinking of Somebody.

De-accessioned from the Melbourne collection in 1950, it re-surfaced in 1992 at auction in London (under the title “Christmas Holly”). More recently, it was auctioned by Sotheby’s in London in 2008, selling for almost £30,000.