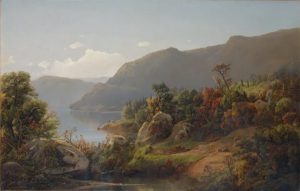 Cox quotes from a letter by Redmond Barry, describing this as “a very handsome picture,” and the donor as “an American gentleman Mr Ricardo” {sic}.

Sonntag, a lesser-known member of the Hudson River School, typically painted serene Italianate vistas like this. It may have resonated with contemporary local landscapes in the pre-Felton collection by Chevalier and von Guèrard.

For the painter, see Bénézit 13, pp.25-26 (as William Louis Sonntag the Elder; listing the present work)