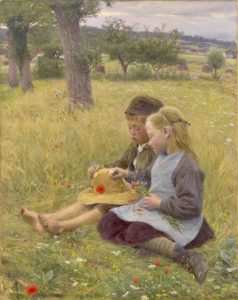 This image of childhood was one of several selected from the Paris Salon of 1893 by Longstaff.

Souza Pinto lived and worked for most of his life in northern France. A student of Alexandre Cabanel (1823-89), whose academic style he emulated initially, he later came under the influence of the realist master Jules Bastien-Lepage (1848-84). Souza Pinto’s 1898 canvas The Potato Harvest (Musée d’Orsay, Paris) was apparently inspired by Bastien-Lepage’s 1878 painting October (shown at the Paris Salon in 1879, and later acquired for the NGV, through the Felton Bequest, in 1928).