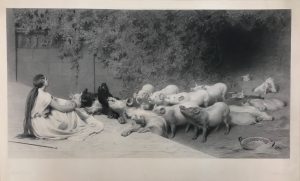 Like the other engravings after Rivière donated in 1876, this impression is signed by both painter and print-maker.

Rivière’s original painting of Circe presiding over an assembly of swine (Ulysses/Odysseus’ crew transformed through her magic) earned him high praise at the Royal Academy in 1871. The canvas was sold recently after resurfacing in a deceased estate.

The NGV lists this print as by an unknown engraver (not reproduced); ID photo shown here taken by author (Aug.2019)

For the original painting, see “Circe rediscovered after a century” (https://blog.tooveys.com/2018/08/circe-rediscovered-after-a-century/)