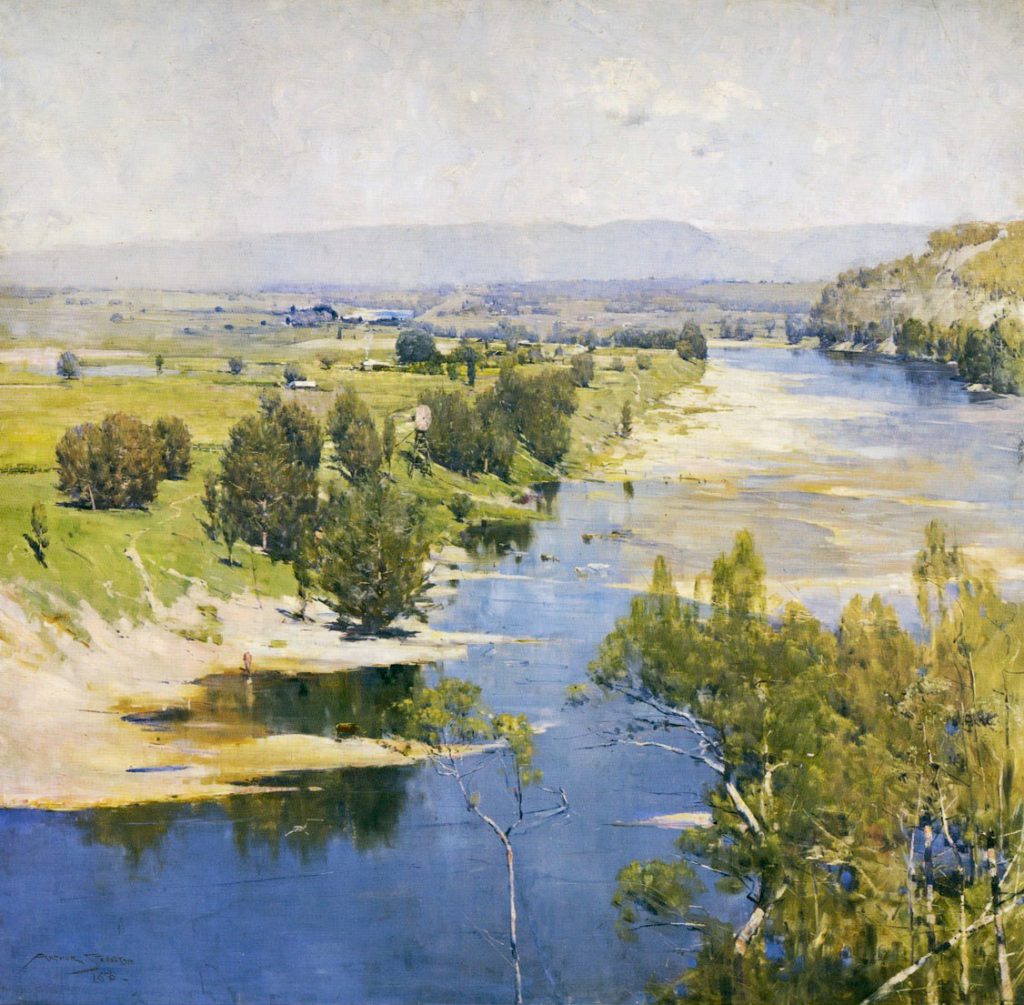 In December 1896, Bernard Hall wrote to the chairman of the National Gallery committee: “With regard to the exhibition being held in town by Mr Arthur Streeton, I have to advise you of its general excellence, & to recommend you most strongly to purchase something important for the Gallery from him before he leaves Australia for Europe. Just such a picture exists in No.5 – ‘The purple noon’s transparent light’ {sic} – on the Hawkesbury River. As it would come under the classification of ‘the best work by the best men,’ I strongly advise the Trustees not to miss the opportunity of acquiring it, & of adding to the Australian section what is most characteristically Australian in the way of pictorial presentment” (quoted by Cox 1970).

This ringing recommendation exemplifies the perspicacity Hall showed on several occasions during his many years advising on purchases while NGV director, and also gives the lie to the implication (often voiced, even recently) that he was incapable of appreciating progressive Australian art of the period, or indeed any sort of contemporary painting other than his own rather conservative tonalism. For more extended comments on Hall’s involvement in the development of the pre-Felton collection, see the linked entry on him.

The artist reported that the temperature in the shade was 108°F [42°C] when he was working at the site, early in 1896. The title is drawn from the first verse of Shelley’s 1818 poem Stanzas Written in Dejection, Near Naples, which goes on, interestingly: “Alas! I have nor hope nor health, // Nor peace within nor calm around…”

Streeton’s canvas, bought for £150, later came to be regarded as a pinnacle of Australian landscape painting. J.S.MacDonald, for instance, wrote of it in 1916: “You could almost take this picture as a National Symbol.” Similar sentiments have been repeated many times since.

Hall’s letter of 3 Dec.1896 is quoted by Cox (1970), p.425, n.9. For the full text of Shelley’s poem, see e.g. http://www.nbu.bg/webs/amb/british/3/shelley/stanzas.htm. The NGV catalogue provides details on the work’s original and later framing, and quotes Streeton’s estimate of the temperature.