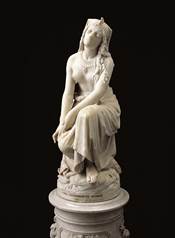 This work is described in NGV 1894 and 1905 as “modelled by G.Lombardi, and executed by C.F.Summers.” The latter is documented as working with, and producing replicas of works by, both Lombardi brothers; but on this occasion G.B.Lombardi is presumably referred to.

The Old Testament story of Elisha and the Shunammite woman appears in 2 Kings 4: 8-37.

Many thanks to Mark Orlandi for confirming that the present work is still in the Bendigo collection and sending the ID photograph shown here (July 2018). For a stereograph by Boake, see SLV catalogue (acc.no.H82.261/16), with a reproduction

For the Ruth auctioned by Christie’s, New York, 26 Nov.2013, lot 289, see http://www.christies.com/lotfinder/sculptures-statues-figures/an-english-white-marble-figure-of-ruth-5741558-details.aspx, describing the figure as 95 cm high, signed and dated C.F.Summers/Rome/ 1893, and previously the “property of a lady”; Christie’s’ notes exhibit confusion between C.F.Summers and his father