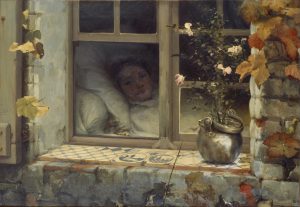 Shown at the Paris Salon in 1884, this work typifies the sentimental strain of later 19th-century French painting, while also giving the impression of a closely-cropped photograph.

The artist, a native of Péronne, in Northern France, was a well-regarded naturalist painter, best known for his seascapes. He studied at the Académie Julian, and exhibited at the Salon from 1878.

For the artist, see Bénézit 13, pp.719-20 (listing this work); and  http://fr.wikipedia.org/wiki/Francis_Tattegrain