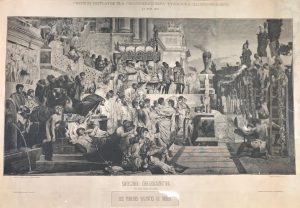 One of only a few 19th-century prints included in Levey’s 1879 donation, this large-scale engraving reproduced a popular religious image of the day, recreating Roman Emperor Nero’s infamous persecution of Early Christians in proto-cinematic detail.

Unfortunately the print is in mediocre condition, yellowed and somewhat damaged in places. Tegazzo’s name appears below the image at lower right, with Siemiradzki’s within the image immediately above.

Siemiradzki, who specialized in Greco-Roman scenes, presented the original monumental canvas, Pochodnie Nerona (1877), to the new Polish National Museum in Krakow in 1879. As with the slightly later novel Quo vadis? (written by Henryk Sienkiewicz in 1895-6), the story of the travails of the Early Christians under the Romans had a contemporary sub-text to do with the Polish struggle against Russian oppression.

The NGV impression is catalogued as by an unknown engraver (and not reproduced); author’s ID photo shown here