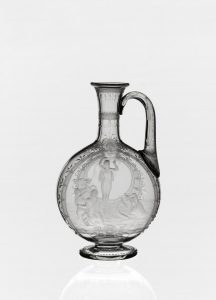 The firm of Webb & Sons was established at Stourbridge, Worcestershire, in 1837, closing only in 1990.

Melbourne’s pre-Felton examples all appear to have been acquired from Webb & Sons at the Melbourne International Exhibition in 1881, where the company apparently had a spectacular stand. Edwards (1998), who reproduces a number of the extant examples, all dated to about 1880, notes that others were de-accessioned in the 1940s.