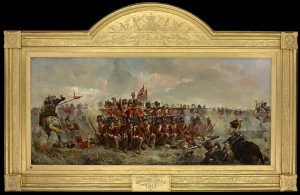 This picture (whose elaborate frame is original, and suitably military in its detail) was voted the most popular work in the NGV by the visiting public in 1906. The wide format gives a proto-cinematic character to the depiction of the battle, which took place in Belgium in June 1815, two days before Waterloo.

The work created a sensation at the RA in 1875, earning high praise from many commentators, notably John Ruskin, who, while admitting that, previously, he had “said that no woman could paint,” wrote that this was “Amazon’s work… with gradations of colour and shade which I have not seen the like of since Turner’s death” (quoted in NGV 1894).

Elizabeth Thompson (known as Lady Butler after her marriage to British army officer Sir William Butler in 1877) made her name with the Crimean War painting The Roll Call (Royal Collection, 1874), and continued to paint military subjects during a long and successful career. For a portrait drawing of her, see Ward (L.) Elizabeth Thompson {1881} NGV [DR].

The entry in NGV 1894 includes a lengthy excerpt from Ruskin’s Notes of the Academy, 1875, as quoted above). The NGV catalogue provides fufrther information on the work’s history and its frame; see also Gott 19C (2003), pp.104-5.


For the artist, see Bénézit 13, pp.893-94 and http://en.wikipedia.org/wiki/Elizabeth_Thompson (with further references). See also Wood Victorian Painters (1995), vol.2, pp.96-98 (“Military and Battle Painting”), noting that Lady Butler was the outstanding exponent of the era