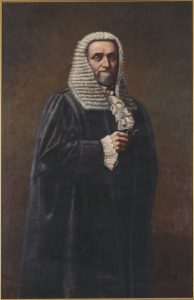 Lalor (1827-89) famously led the Eureka Stockade in December 1854. Acquitted in March 1855, he was then appointed to the Victorian Legislative Council in December 1855 as a goldfields representative. In the new Victorian Parliament of 1856, he moved to the Legislative Assembly and remained a member for many years, eventually becoming Speaker (1880-87).

The SLV advises that a very similar portrait in the Ballarat Art Gallery, presumably the original, is by Tennyson Cole (for whom, see Cole (T.) Duncan Gillies 1891 {1891} SLV [PA]).

Mrs Annie Thunder (née Fitzgerald) is described by the SLV as a well-respected copyist (with the biographical dates noted above). The entry in Joan Kerr’s 1992 Dictionary suggests that Mrs Thunder studied in Paris, and was active in Victoria from 1866-91, working in pastels in particular.