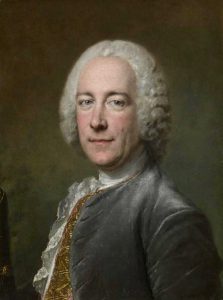 This lively portrait was purchased, for a remarkably small sum, on the sage advice of von Guérard while he was Master of the National Gallery School (1870-82).

Early NGV catalogues list the canvas, which has the quality and finesse of a pastel drawing, simply as an anonymous portrait of an unknown sitter. However, Ursula Hoff later suggested an 18th-century French origin, and, following recent conservation work at the NGV, the picture has been assigned to Tocqué.

Adopted as a child by the portrait painter Jean-Marc Nattier, who was later his teacher, Tocqué subsequently became a highly successful portraitist to European royalty from the 1730s onwards. Other portraits are held in the Louvre, London National Gallery etc.