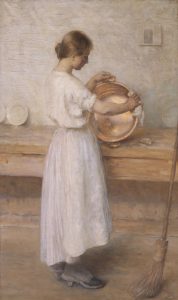 Tucker, a talented artist, was a somewhat underestimated contributor to the development of Australian painting in the late 19th century. He migrated to Australia, for his health, in 1881, and between 1883 and 1887 studied at the National Gallery School under Folingsby, winning several drawing prizes.

Between 1887 and 1892, he studied and painted in Paris. After returning to Melbourne, he and Phillips Fox established the Melbourne School of Art, run along French lines, and, from 1894, a popular summer school of art at Charterisville. Still in poor health, Tucker returned to London in 1899. His Picardy Shrimpfisher of 1891 was bought for the Warrnambool Art Gallery in the year it was painted, and an example of his later work, Nasturtiums (c.1903) is in the NGA, Canberra (purchased in 1976).

The maid-of-all-work, as characterized in the domestic manuals of Mrs Beeton and others (e.g. Mrs Starch’s Scrapbook, 1907), was expected to carry out innumerable tasks in Victorian and Edwardian houses.