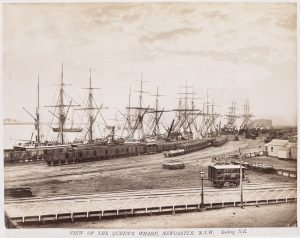 This set of photos is recorded under gifts in the NGV’s Annual Report for 1872. The SLV notes that several of the prints are dated c.1860, and that the donor’s address is noted on the verso of one photo as York Street, Emerald Hill (South Melbourne).

Further details on Captain Patching appear to be scarce, but he is recorded later as the master of a ship called “Olivia Davis,” departing from Geelong for Sydney on 5 September 1877.

Refer SLV catalogue for details and reproductions of all 9 photos; the print reproduced here is H141646