Unknown after Rubens Descent from the Cross {1868} NGV [PR] 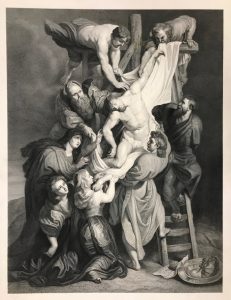 This print reproduces Rubens’s early masterpiece, the central panel of his altarpiece for Antwerp Cathedral (1612-14).

The work has been engraved many times since the 17th century, but in the absence of any identifying inscriptions, it is difficult to be specific about the origins of this large-scale impression.

The NGV catalogue does not include a reproduction; author’s ID photo reproduced here