According to the 1905 NGV catalogue, this painting was purchased in Melbourne, but the early catalogues provide few other details, making identification difficult. The NGV’s unpublished list of pre-1905 acquisitions lists it as “Puritan’s head.” It was still in the NGV in 1943 (cat.632), but no longer appears to be in the collection.

Oliver Cromwell (1599-1658), the central figure in the events leading to the execution of Charles I of England (1649), later appointed himself Lord Protector of Britain and Ireland (1653-58). Portraits from his era generally reflect the Puritan and military character of his rule; compare for example the 1656 portrait of Cromwell himself by Samuel Cooper (1609-72), in the National Portrait Gallery, London (see photo below). 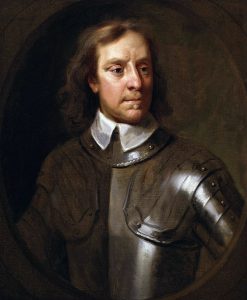