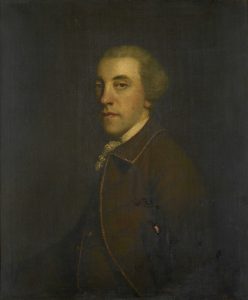 Hoff (1995) catalogued it as “British, mid-18th century,” and suggested a date in the 1760s, on the basis of the clothing of the sitter (presumably an ancestor of the donor).

Regarding the identity and garb of the sitter, his drab attire makes it inherently unlikely that he was the famous Bath dandy, Richard “Beau” Nash (1674-1761), well-known for his extravagant costumes, as displayed for instance in the Tunbridge Wells portrait of him, c.1745, by William Hoare (1707-92).

For details and reproduction, see  see also Hoff (1995), p.28, as “Gentleman in Grey Wig,” citing the 1870 NGV acquisition description, and noting discoloured varnish and some damage

For Hoare’s portrait of “Beau” Nash, see http://www.bbc.co.uk/arts/yourpaintings/paintings/richard-beau-nash-77340; see also https://en.wikipedia.org/wiki/Beau_Nash, citing the biography of Nash by Oliver Goldsmith, and a 2005 monograph by John Eglin