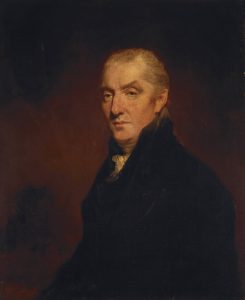 This painting, bought from a Melbourne dealer for a small sum, was listed in NGV 1875 and subsequent early catalogues as an anonymous portrait of an unknown gentleman.

Hoff (1995) describes it as having “some affinity with the manner of Romney” – a scarcely enthusiastic description of what appears to be an unusually unprepossessing work (Oscar Wilde’s 1890 novel The Picture of Dorian Gray springs to mind).

However, it is obviously yellowed by varnish, hampering proper assessment. Hoff allows for the possibility that the canvas dates from the mid 18th century, but the NGV’s current online catalogue entry simply suggests “before 1900.”