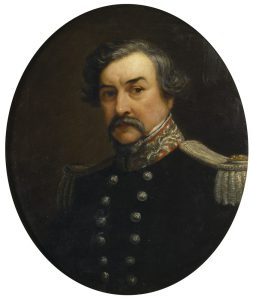 Darling was Victorian Governor from 1863 to 1868; another portrait of him, painted by John Botterill, c.1866, was included in the Public Library’s “Oval portrait” series.

Although the present work is described as by an unknown artist (and noted as such in both NGV 1894 and 1905), the State Library suggests that it may be identical with a portrait of Darling by Burtt, included in the first exhibition of the Victorian Academy of Art in 1870. However, this hypothesis is queried by Madeleine Say, in her biography of Burtt for Design & Art Australia Online (2010), on the grounds that the artist was still alive when the work was donated.