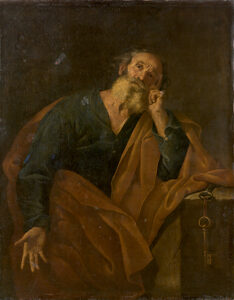 The more recent NGV view, however, is that both the style and technique of the painting point to its being a 17th-century work, probably Italian. In 2020, an NGV online video included it in connection with a report on MS3, a new resin varnish developed jointly by the gallery and the CSIRO. Nevertheless, Dr Carl Villis, Senior Conservator of Paintings at the NGV, advises that the work is in poor shape, still requiring considerable restoration to address major paint losses and other problems.

Despite the recurrent suggestion that the picture relates to Guido Reni (first raised in the 1894 NGV catalogue, and still noted in the gallery’s current online catalogue), there does not appear to be an obvious relationship with any accepted paintings by Reni, although further research may prove productive. Reni did produce several versions of the subject (showing St Peter reflecting ruefully on his denial of Christ), but they typically show the saint half length, clasping his hands together, as in a canvas of 1624-25 now in the Doria-Pamphili Gallery, Rome, and several later variants. Melbourne’s version shows the saint in a more expansive, meditative pose, with his attribute, the famous keys, prominent to the lower right.

See https://www.ngv.vic.gov.au/explore/collection/work/5389/ (details as noted above; not reproduced). Cf. Dean European Paintings of the 19th and early 20th centuries (1995), p.120 (including a black and white reproduction). For their expert advice on the work (email correspondence, Jan.2021), I am grateful to the NGV’s Carl Villis and Laurie Benson (Curator, International Paintings); the latter kindly forwarded the ID photo shown here. See also Carl Villis, “Collaborating to conserve,” NGV Magazine 25 (Nov.-Dec.2020), pp.64-67, and https://www.youtube.com/watch?v=tNw6nYedsKY (many thanks to two recent correspondents to the Before Felton website, Eric Harding and Russell Clarke, for drawing my attention to these references)