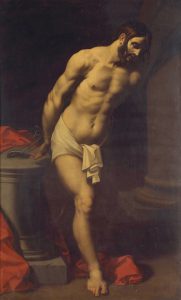 This canvas was presented to Melbourne in 1883, with considerable fanfare, as an original work by famed Italian Baroque painter Guido Reni.

It came with an impressive array of supporting testimonials, including a glowing description of it (c.1823) by Baron Forbin Jansen, a former director of the Louvre, as “a true work of Guido Reni and one of the most beautiful of that great master” (documents appended to the notice of acquisition in the gallery’s annual report for 1882). By 1894, however, the work was catalogued more cautiously only as attributed to Reni – a description maintained in 1905 and subsequent NGV catalogues through to 1961.

By 1973, when Ursula Hoff’s scholarly catalogue of the “before 1800” NGV collection appeared, the painting had been demoted further to “after Guido Reni,” and it was eventually omitted altogether from her revised edition published in 1995, implying a 19th-century date. It is now listed by the NGV with the attribution noted above, the early 1820s testimonial of Baron Jansen obviously providing a terminus ante quem (in other words, it must have been painted by c.1823).

The relationship with Seghers appears to be based on the similarity of Christ to the central figure in the engraving of the same subject by Lucas Vosterman (1595-1675; Flemish) after Seghers, a Flemish follower of Caravaggio’s style who worked in Italy from 1613, returning to Antwerp in 1620 to lead a successful career for the remainder of his life.

The donor of the present work, Sir James McBain (1828-92), was a Scot who migrated to Melbourne in 1853, and became a prominent banker and politician. He was an NGV Trustee, and president of the executive commission for the 1888 Centennial Exhibition. He evidently acquired it from a Dr G.D.Waite, a British dental surgeon, who lent the picture to the NGV in 1876 (as a Reni), and subsequently wrote a testimonial to its excellence (1877; also quoted in the NGV’s 1882 annual report).

For Seghers, see e.g. Bénézit 12, pp.939-40 and AKL 102 (2019), pp.494-95; and for the Vorsterman engraving, see e.g. https://www.nationalgalleries.org/art-and-artists/151005/christ-column (with thanks to Carl Villis for his advice on this reference). For other NGV works by or after Reni, see Hoff (1995), pp.236-7, and the gallery’s current online catalogue. For comments on the fluctuations in Reni’s posthumous reputation, see linked artist entry.