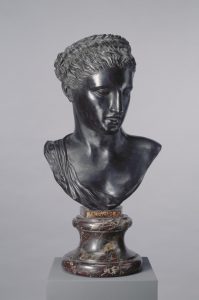 One of several “art bronzes” listed under new acquisitions in the NGV’s 1892 annual report, this bust is a reproduction of the Roman bronze found at Herculaneum in 1756, and acquired for the Naples museum in 1884.

An inscription painted on the pedestal follows the traditional identification of the figure as Berenice (Ptolemaic queen of Egypt, c.340-279/268 BC). She is now taken to represent either Artemis or simply an unknown Roman woman.