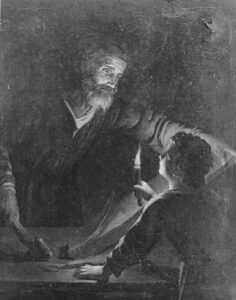 This work is described in NGV 1894 simply as a “copy of an old master.” The composition is in the Caravaggesque tradition featuring candlelit figures (prevalent in Italian, Dutch and French 17th-century painting).

The donor was presumably Elizabeth Mollison, who endowed a theological library to St Paul’s Cathedral, Melbourne (opened in 1893, and now located at Trinity College at the University of Melbourne), in honour of her brother Alexander Fullerton Mollison, a Victorian pioneer/squatter.


For the Caravaggesque tradition, see e.g. Benedict Nicolson, The International Caravaggesque Movement: lists of pictures by Caravaggio and his followers throughout Europe from 1590-1650, Phaidon, 1979

For Miss Mollison and her endowment, see http://www.dml.vic.edu.au/MCD/PolTrinity.html (the Mollison library at Trinity College); and for Alexander Fullerton Mollison, see http://adb.anu.edu.au/biography/mollison-alexander-fullerton-2466 (biography by Gael Thomsen, published in ADB vol.2, 1967)