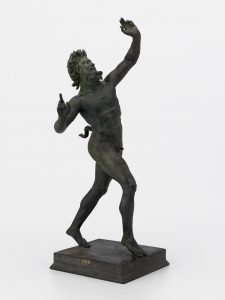 This is a replica of the bronze figure in the Naples Museum, found at Pompeii in 1830, and widely copied thereafter.

Haskell & Penny include the original in their catalogue of the hundred antique statues attracting the highest regard in the modern era, noting that recent scholars view it as a Roman copy of a Hellenistic original, possibly from the circle of Lyssipus.