Crozier (1796-1848), born in Northern Ireland, was a member of several expeditions to both Poles, and took command of the notorious North-West Passage expedition after Franklin died in June 1847 (see now * Maguire after Negelen Sir John Franklin {1875} Loc? [PR]). Crozier and the rest of the expedition are presumed to have died after abandoning their ice-bound ships in April 1848.

The work formerly in Melbourne, described in NGV 1894 as a “coloured portrait,” may have been based on a print of the well-known photograph of Crozier in naval uniform, reproduced below. 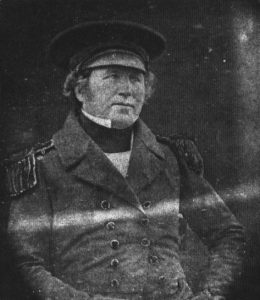 For Crozier, see e.g. http://en.wikipedia.org/wiki/Francis_Crozier (with further references and photographs, including the image shown here)