This print was presented together with * Maguire after Negelen Sir John Franklin {1875} Loc? [PR].

George Back (1796-1878), later appointed Admiral, travelled on Franklin’s voyages of exploration in 1819-22 and 1825-27, and, after the famous explorer disappeared on his fourth Arctic voyage, was one of those involved in organizing searches for him and his party. 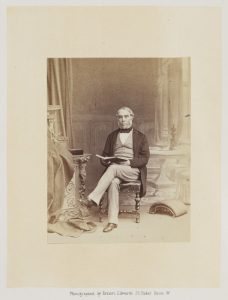 There are several extant portraits of Back; it is unclear on which of them the present print was based.

For portraits of Back, see e.g. http://www.npg.org.uk/collections/search/person/mp00199/sir-george-back?search=sas&sText=George+Back&OConly=true