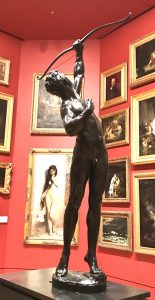 According to NGV 1905, this statuette was bought after being shown in the Centennial International Exhibition held in Melbourne in 1889. Bénézit lists it as Sagittarius – possibly its original title?

The sculptor, a Professor at the Berlin Academy, contributed statues of J.S.Bach, Frederick the Great and others to the famous Siegesallee in Berlin (dedicated in 1899).