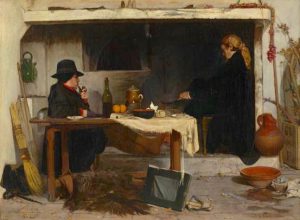 This youthful work, with which Vibert debuted at the Paris Salon in 1863, helped make his name. It was one of the first works bought by the Commissioners of Fine Arts for Victoria, selected by Eastlake from a London exhibition.

Its Velazquez-influenced style may also be compared with early Manet.

Vibert subsequently became an academic painter with a curious specialization in the daily lives of monks.