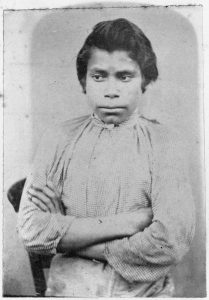 This set of images of just over 100 members of the community at Conanderkk, near Healesville, was shown at the 1866 Intercolonial exhibition and subsequently presented to the Melbourne Public Library. The series included the image of William Barak, aged 33: for a reproduction, see Photography – Introduction.

A number of these photographs were included in the 1992 First Collections exhibition, and also in the National Portrait Gallery’s “Heads of the People” exhibition in 2000. In the catalogue accompanying the latter exhibition, Tim Bonyhady emphasises the colonial context, noting that an earlier series by Walter (1865) specifically described the individual Aborigines portrayed as “under civilisation.” Each figure is shown wearing European clothing, and identified by name, age and origin.


For the present collection, see also Galbally & others, First Collections (1992), and Bonyhady & Sayers Heads of the People (2000), esp.pp.4-6 (Bonyhady’s Introduction, as cited above)