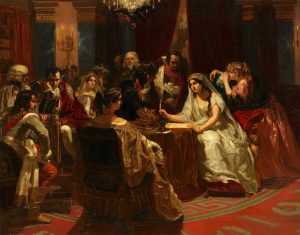 “This picture represents an event which took place in the Grand Cabinet of the Emperor Napoleon at the Tuileries on the evening of the 16th December, 1809” (NGV 1894). Napoleon is visible in the middle ground to the left, brooding on his lack of an heir.

Ward was well known for his historical frescoes in the Houses of Parliament, London (1852ff.). This canvas, first shown at the RA in 1853, was purchased from the Centennial International Exhibition held in Melbourne in 1888.