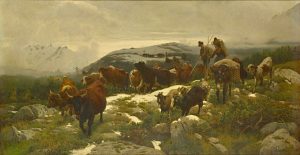 This large, atmospheric canvas, shown in the Paris Salon of 1866, was one of several early NGV purchases featuring cows and other animals (e.g. Baisch Dutch Pastures, Morning 1885 {1888} NGV [PA]).

Said to be a favourite with Melbourne gallery school students charged with copying works in the collection, especially in the 1870s, the present picture was later described as Weber’s best work.

The artist, born in Bavaria, worked in Brittany in the 1860s, but left France in 1870, owing to the Franco-Prussian War, and ended his career in London.

For this work, see Galbally First Collections (1992), pp.57-8, cat.no.16 (with further references and details, noting that the picture was frequently copied by early Gallery school students, and citing Bryan’s Dictionary of Painters and Engravers, 1934) about it being Weber’s best work

For the artist, see Bénézit 14, pp.710-11 (listing the present paintings); and http://en.wikipedia.org/wiki/Otto_Weber_(painter). NGV 1894 quotes Hamerton’s Painting in France, and also indicates, incorrectly, that Weber was killed in the Franco-Prussian War