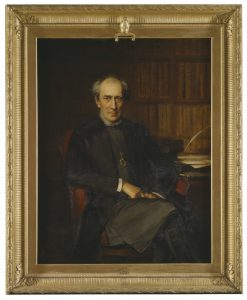 Weigall, a successful portraitist, painted this work after Perry returned to England at the end of his term as Archbishop of Melbourne; it was first shown at the Royal Academy in London in 1875. The frame was made in London at the time, by W.A.Smith.

The SLV indicates that this painting was transferred from the NGV in 1929; however, it was still listed in the 1943 NGV catalogue.