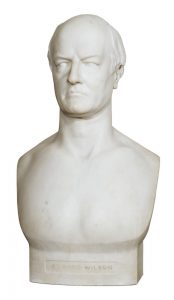 This bust epitomizes the earlier career of the sitter (1813-78), editor of the Argus from 1848, and a vociferous critic of vested interests in mid 19th-century Victoria.

A later image of Wilson (an anonymous 1878 engraving) depicts him as far less vigorous, reflecting problems he began to experience with his health in middle age, leading him to retire to England in 1862.