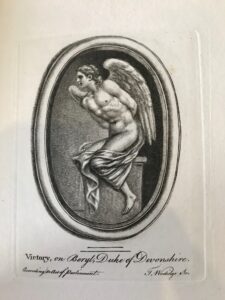 Worlidge studied art in London with the Genoese refugee Alessandro Grimaldi (whose daughter he married), subsequently making his name as a painter of portrait miniatures. In later life, he became fascinated with Rembrandt’s etchings, and evidently attempted to emulate them.

This collection of 182 small drypoint reproductions of antique gems in British private collections was first issued in serial form in 1854, completed after Worlidge’s death by his pupils William Grimaldi and George Powle, and published in 1768 by his widow. The later gem collector and expert Charles William King apparently regarded many of Worlidge’s plates as inferior to those of others such as Spilsbury.