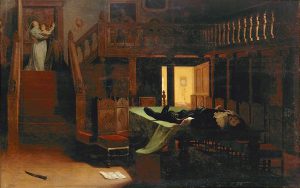 In the age before BBC TV dramas, theatrical re-enactments and vivid images helped conjure up famous historical events like this, the murder of the widely-detested courtier of James I and Charles I, in Portsmouth, in August 1628.

Villiers’ assassin, a disaffected army officer named John Felton, became a popular hero, but was hanged nonetheless in November 1628. The story appeared in fictionalized form in Alexandre Dumas’ 1844 novel The Three Musketeers – possibly the direct basis for the present work, shown at the International Exhibition in Melbourne in 1880.

For Villiers (1592-1628), who was also a major art patron in Stuart England, see e.g. http://en.wikipedia.org/wiki/George_Villiers,_1st_Duke_of_Buckingham (a detailed, well-referenced article)