The 1854 Melbourne Exhibition was staged in a purpose-built structure in William Street (on the site where Melbourne’s Royal Mint was built later). On a much smaller scale, both the enterprise and the building echoed London’s Great Exhibition, held three years earlier in the Crystal Palace. 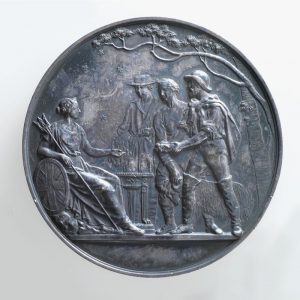 The official 1854 prize medals (minted in London) depicted the Exhibition building, on the obverse, and a miner, shepherd and farmer presenting the fruits of their labours to Britannia, on the reverse. Museum Victoria holds a number of examples, in both silver and bronze, awarded to various exhibitors: see e.g. photo at right. One of these may be the medal previously in the pre-Felton NGV collection; or it may have been the plaster model.

Wyon, a member of a noted family of English medallists, succeeded his father Benjamin (1802-58) as Chief Engraver of Seals. He often worked in collaboration with his younger brothers, notably Alfred (1837-84). The most famous member of the family, William Wyon (1795-1851), was chief engraver at London’s Royal Mint from 1828 until his death; he designed the prize medals for the Great Exhibition of 1851.

An unofficial medal, in tin, designed by William Barclay, was also minted for the 1854 exhibition, by the Kangaroo Office: for details and a reproduction, see Museums Victoria catalogue (item NU 20169), noting that it was transferred from the NGV in 1976.

For the medal by Barclay, see https://collections.museumsvictoria.com.au/items/59425 (accessed 26 Oct.2020)