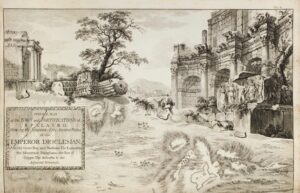 This volume, dedicated to King George III, documents the remains of the large fortified seafront palace built from c.295 AD for the late Roman Emperor Diocletian at Split (Spalatum, in the Roman province of Dalmatia).

The 54 etchings, by Bartolozzi, Cunego and others, illustrate the site as surveyed by Adam and Clérisseau. There is an introductory text by Adam, who was Architect of the King’s Works for George III from 1761-69.

Diocletian’s rule as emperor (284ff.) included several periods as one of four tetrarchs (co-rulers); he abdicated in 305 and died in c.312. The Palace at Split (in modern Croatia) was declared a World Heritage Site by UNESCO in 1979.

Refer SLV catalogue for full bibliographic details (not reproduced). For digital reproductions of another copy held in the Royal Academy, see https://www.royalacademy.org.uk/art-artists/book/ruins-of-the-palace-of-the-emperor-diocletian-at-spalatro-in-dalmatia-by-r

For Bartolozzi, see linked artist entry; for Cunego, see Cunego & others after Raphael: Engravings after Paintings in the Loggie {by 1861?} SLV [PR]. For the archaeological site, see e.g. http://w3.mrki.info/split/diokl.html and https://en.wikipedia.org/wiki/Diocletian%27s_Palace, with further references (all websites accessed 28 Nov.2020)