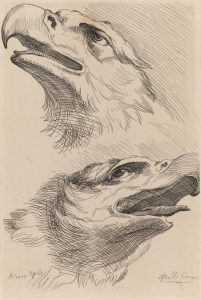 This print, which demonstrates considerable technical skill, is inscribed (on the plate) “Albert 28/8 41” and “after H. Carracci.”

The source, followed closely, is a drawing in the British Royal Collection, now identified as from Agostino Carracci’s circle, and dated to the 1620s. Rudolf Wittkower (1952), while listing the drawing under Agostino himself, commented that it reveals “a meticulous realism foreign to his style.”

Albert’s inscription points to the fact that the drawing was believed at the time he copied it to be by Agostino’s more famous older brother Annibale Carracci (the equivalent of whose name, in English, is Hannibal). The birds resemble those accompanying or symbolizing Jupiter in the Farnese Ceiling frescoes in Rome, completed mainly by Annibale.

The NGV catalogue lists this work as after Agostino Carracci, and lists various references, including Wittkower 228 [Carracci]). The latter reference is to Rudolf Wittkower, The Drawings of the Carracci in the Collection of Her Majesty the Queen at Windsor Castle, Phaidon, 1952, cat.228, p.127 (quoted). See also https://www.rct.uk/collection/902011/two-heads-of-eagles (RCIN 902011; with a good colour reproduction); and https://www.rct.uk/collection/themes/trails/the-patronage-and-collecting-of-queen-victoria-and-prince-albert/two-head-0 [both accessed 31/8/19]

For the Farnese Ceiling, see e.g. Charles Dempsey, Annibale Carracci: The Farnese Gallery, Rome, New York: Braziller, 1995: the relevant scenes are those showing Jupiter with Juno, and Ganymede with the Eagle