This panel, bought after being shown at the 1888 Centennial International Exhibition in Melbourne, is described in the NGV’s 1889 annual report as “study of partridge.” The artist apparently worked mainly as a landscapist, and was active in both Germany and Italy.

This work was de-accessioned as part of the general purge of the collection carried out after Daryl Lindsay became NGV Director in March 1941. 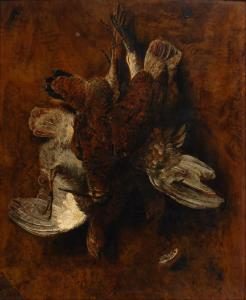