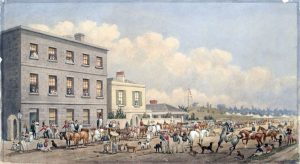 This scene is inscribed on the mount with the title shown above, followed by the words “by an eye-witness.” Austin, evidently the witness involved (although Downer & Phipps emphasise the length of time that had passed between the event and this depiction, which they date to c.1880), was employed as a Survey Department draftsman from 1850-56, and was later documented working as an artist in Brisbane in the 1870s-80s.

The SLV also owns an undated colour lithograph based on this work, with a description below, also credited to the eye-witness, which reads in part: “When the escort arrived the clerks and draftsmen of the Survey Department were looking down on the scene from the windows, and the next day nearly the whole staff sent in their resignations, determined to try their luck at gold digging. The central group represents two lucky diggers of the sailor class spinning a yarn to some new chums. On the left of this group is a new chum Chinaman stopping to listen to the astonishing accounts of a countryman of his who has just returned from the goldfields.”