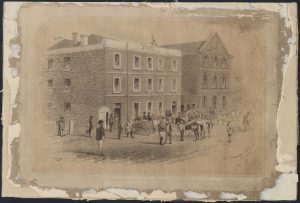 The impression donated by Fawkner, reproduced here, is in mediocre condition due to clumsy removal of the original mount; the SLV also holds a better impression, accessioned c.1934.

Soon after this print was made, this building was superseded by the much more grandiose Treasury Building at the top of Collins Street, built 1858-62 in Renaissance Revival style to the design of J.J.Clark, and described by Frances O’Neill as “one of the most significant 19th-century buildings in Australia.” For an early view of Clark’s building, see De Gruchy & Leigh Panoramic View of Melbourne 1863 {by 1894} SLV [PR].