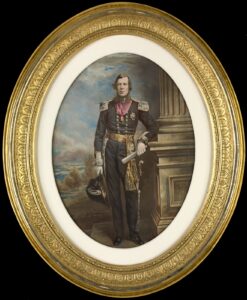 In his role as Victoria’s third Governor (1856-63), Barkly formally welcomed the formation of the new Museum of Art in May 1861 as “…the auspicious commencement of so grand a design.” (see Inglis & others 2011).

The various portraits of Barkly listed below (evidence of the esteem in which he was held) were all completed after he left to take up the position of Governor of Mauritius in 1863.

Portraits of Barkly in the pre-Felton collection: