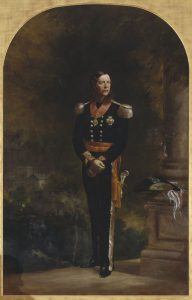 This grandiose portrait of Barkly, Victoria’s third Governor (from 1856 to 1863), shows him wearing the Order of the Bath, awarded for earlier diplomatic service.

According to the State Library, Barkly (1815-98) “…chose Thomas Clark to paint his portrait, for which only two sittings could be secured before Barkly left Victoria to take up the position of Governor of Mauritius in 1863. Barkly is depicted in the grounds of Toorak House which, at the time, was the Governor’s residence until Government House in the Domain was completed in 1870.” An equerry and two horses in the background were noted in a report on the work, before it was finished, in the Melbourne Argus in May 1864; these details were painted out later, and are only faintly visible now.

Thomas Clark arrived in Australia in about 1852 and is known especially for his landscapes. Later, he appointed was head of design in the new National Gallery art school from 1871-76, teaching Tom Roberts, McCubbin and others.

As Alison Inglis and others point out (2011), both Clark and Barkly were actively involved in the formation of the new Museum of Art at the Melbourne library in 1861, Clark proffering advice on what to collect, and Barkly, as Governor, formally welcoming the opening of the new Museum in May 1861.

The SLV catalogue entry cites the Argus report of 18 May 1864; see also SLV, The Art of the Collection (2007), p.42 (Brenda Niall). For Clark and Barkly’s involvement in the early development of the new art museum, see Inglis & others, “Opening of the new Museum of Art” (2011)