* Béatrizet after Michelangelo The Last Judgement {by 1894} Loc? [PR]

This large-scale engraving of Michelangelo’s famous Sistine Chapel fresco (1536-41), produced in a lavish multi-sheet format, was first issued in 1562 by the French-publisher Antoine Lafréry (1512-77), known in Italy as Antonio Lafreri.

Lafréry also superintended the series of engravings known as the Speculum Romanae Magnificentiae (published in album form in 1575). A copy of his Illustrium iureconsultorum imagines (Rome, 1566), containing 25 portraits of eminent medieval and Renaissance lawyers, was acquired for the NGV in 1963.

Béatrizet, like Lafréry, was born in France but spent most of his career in Rome.

The present work, listed in NGV 1894 and 1905, no longer appears to be in the Melbourne collection; other impressions are held in the Metropolitan Museum and elsewhere. 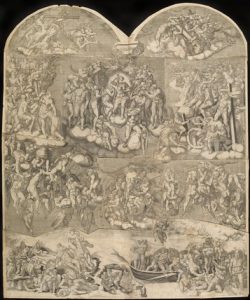