The 1894 and 1905 NGV catalogues both list this statue as a replica, but provide contradictory details. NGV 1894 indicates that the original was in the Vatican, but this seems to arise from confusion with an antique work (reproduced below), probably the basis for a plaster cast also in the pre-Felton collection.

NGV 1905 describes the present statue as a replica of Benzoni’s original statue in the Rome Opera House, possibly a Euterpe documented as made by Benzoni for Prince Alessandro Torlonia in 1836.

Benzoni’s sculpture was one of four donated to Melbourne in 1885 by Chapman, including * Gott Flora {1885} Loc? [SC], also formally de-accessioned with the present work and transferred to Geelong in October 1941. 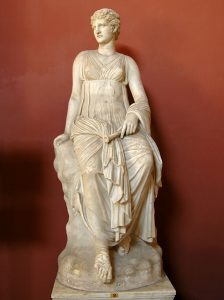