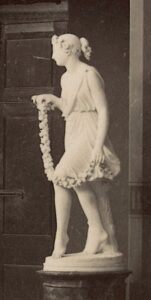 “FLORA, in the act of dancing, and holding  in both hands a festoon of roses” (description of Gott’s statue in a Roman catalogue, 1860).

This work, one of several donated by Chapman in 1885, presumably typified the neoclassic style of this artist, who trained with Flaxman, and was active in Rome mainly in the 1820s-30s.

In 1941, this statue was formally presented to Geelong West (together with * Benzoni Euterpe {1885} Loc? [SC], also donated in 1885); its later fate is unknown, and no later image has been found.

However, it seems to be identifiable in early photographs of Melbourne’s sculpture collections, such as Rudd’s view of the Rotunda, c.1888 (detail shown here).

For Rudd’s overview of sculpture in the MPL Rotunda, see Sculpture – Introduction

Another Italianate Flora was among the twelve marble statues bought in Rome and donated to Ballarat by Thomas Stoddart (installed in 1884): see SLV photo H99.100/24 (c.1910) and http://www.fbbg.org.au/friends-groups/guiding/statues-walk